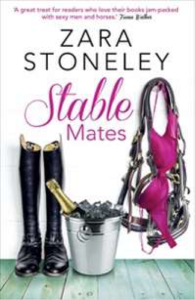 What they say: Leaving a scumbag ex behind her, Lottie Brinkley has hotfooted it out of Spain and back home to the country in serious need of some flirtatious fun to soothe her aching heart.

Luckily for her she’s spoilt for choice with not one but three eligible bachelors offering a steamy romp in the hay! But faced with the attentions of roguish eventer Rory Steel, the smiling Irish eyes of hunky farrier Mick O’Neal, and mysterious newcomer Tom Strachan, how can she possibly choose?

When billionaire landowner Marcus James drops dead unexpectedly, his WAGish wife Amanda threatens to sell the heart of the village and sets her sights on Tom! It seems things are heating up for little Tippermere… both in and out of the saddle.

Review: The greatest of thanks to Harper Impulse and Zara Stoneley for the copy of Stable Mates in return of an honest review.

I jumped at the chance to read this, as someone who’s stepped away from horses only out of necessity! I had recently begun to dream of all the equine books I used to read when I was younger, and wished that there was more out there for adults. Enter Stable Mates!

The equine part of this book is phenomenal. The descriptions are amazing, the landscape drawn beautifully, the horses vivid and fully alive. It’s definitely aimed at people that have experience of horses, which I found great, but I probably wouldn’t recommend for non horsey people. That might seem like a given, taking into account the obvious title and cover, but sometimes people want to give a book a try and ignore that it seems to be aimed at a certain reader.

It took me a while to get into the book, one of the first issues was that the village of Tippermere and the book in general, automatically brought your mind to an earlier time in history that was at odds with them texting each other and driving flash cars. I just couldn’t picture it as a modern day story.

The next thing was that I would have thought that the book could possibly have done with a slightly tighter edit, there were just a few little grammatical things that jumped out at me, but that was me being pernickity, I’m sure it won’t affect most people but I always feel the need to warn readers, because if they’re very fussy, it’s better they’re ready so it doesn’t take away from a great story.

The biggest thing for me, however, and people will be shouting at their screens as a result of this one- was all of the sex. I know. I’m cringing myself that I’m saying this, given that the book is very obviously put out as a, well, actually, I’ve seen the term ‘bonkbuster’ used, so let’s go with that! The thing was, every single character seemed to have the same thing on their mind and as a result every time I started to get into the story line, somebody was lusting after someone else, or fumbling, or shagging, and it just took away from what I thought was a very good premise for an equestrian book-namely that nobody knew whether the widow of Marcus, who was the owner of the equestrian centre- the heart of the village as said above- was going to sell or whether she could be turned.

As a result, a thought I couldn’t help regularly thinking, was that if this had been a simple women’s fiction with fewer double entendres and less innuendo , I’d have been one hundred percent in. I would say this was both unfair and wishful thinking on my part, and very selfish of me! The equestrian side of this book just grabbed me and led me to a genre I do not frequent and I shouldn’t want to change it as I have no doubt others will ADORE this book, and I’ve actually recommended it to a few people since I finished!

Back to the story-there were numerous secrets that were expertly unfolded by characters that did, most definitely, grow as the book progressed. Funnily enough I found the males of the story easier to like than the females. I was also surprised, as all reviews I read pointed to people warming to Lottie straight off, and Lottie was probably more for me someone I couldn’t quite figure out. In general, I found I cared about the characters, wanted to know that everything would turn out alright

Anyway: to round up: For all of those people put there who adore Jilly Cooper, want to hear of all the shenanigans that go on in the stables behind closed doors and after dark, are crazy into horses, and like a good, ‘what’s going to happen next’ story; this one is for you. I would definitely recommend. As for me, if Zara Stoneley does ever feel like going more contemporary, I’ll be the first in the queue!