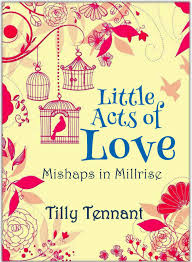 What they say: Mishaps in Millrise – a four-(novella)-part romantic spin-off from Mishaps and Mistletoe

‘Tilly Tennant has obvious talent for turning the every day into a fairy tale… a sweet touch and light humour’ BestChickLit.com

If you’re new to the town of Millrise, then come and meet the residents. But if you fell in love with Phoebe and Jack last Christmas in Mishaps and Mistletoe, then you’ve just been invited to the best reunion ever…

Almost five months have passed since Phoebe and Jack first met in the grotto of a drunken Santa at Hendry’s toy store in Millrise. Since then, Jack and his adorable daughter, Maria, have turned Phoebe’s life around. As she and Jack get closer, Phoebe decides it’s time to put her stagnating career back on track too, which means going for a big promotion at work.

But nothing is ever simple in the strange little world of Hendry’s, and Phoebe is soon wishing she’d stayed on the tills. At home, things aren’t much better as the couple brace themselves to meet their respective in-laws. It’s clear from the start that making friends and influencing people has never been harder. And to make it worse, Phoebe must compete for the affection of Jack’s parents with the perfect partner and mother – who’s been dead for five years…

The Review: First off thanks to Netgalley for providing me with this book in return for an honest review.

Let me start by saying how much I loved this cover, such a pretty, intricate little cover, that, coupled with the blurb, made me think that this would be a nice easygoing read. This it was, and being part of a serial collection of books, and a novella at that, it flew by.

I had not read the book that this was a spin off from and so did not know Phoebe, Jack or indeed his daughter, Maria. We were told that they had been together four months but from the start it didn’t really feel like that. I might have missed Jack’s age, but it seemed he was older than Phoebe, and so their relationship seemed odd, as I would have expected a parent who had lost their spouse to not become so serious within a four month time-frame. This was one of the big problems of the book, I felt it needed a bit more of an introduction to the characters, maybe a smart few lines that would describe both them and their relationship more. If I’d read the first book and gotten to know Jack more I might have seen his behavior here out of character- I found him cranky and standoffish with Phoebe, with a bit of a temper, snapping at her a little too much and too loudly when she did not deserve it.

Another reason the book before would have made things easier was that I couldn’t tally the fact that a few months ago Phoebe hadn’t liked children at all and now her dream job was to be higher up in a toy company.

This all sounds like I didn’t like the book, but I loved the scenes with her mother and father, and found the descriptions of a father’s partaking in a war reenactment hilarious. I have to admit that this was the homely aspect to the book I wanted when I first saw the cover. The book was very nicely written and, I’ll be honest, if I’d read this a few years ago I’d probably have been giving this a 5/5, I think from Phoebe and Jack’s behavior it is aimed at a younger reader (I’m thirty five years old). The other thing that didn’t sell it to me was it being divided into four segments when I think one book would have sewn this all together a little more tightly ( I think the hook of this was introduced a little suddenly and late into this novella, but would have worked as part of one book.) I’m sure others will think differently, bringing me back to my constant thought that no two people will get the same out of any given book, everyone has different thoughts and ideas, things that work for them and things that don’t.

All in all, not for me, but a lovely light read that will appeal to so many so try not to take this pernickety old reviewer’s word for it.

One thought on “Little Acts of Love by Tilly Tennant”