I’m thrilled to be part of the blog tour for My Husband’s Wives by Faith Hogan, with the brilliant Aria, an imprint of Head of Zeus (Thanks to all for the book in return for an honest review) . Below is the review and an extract, and don’t forget to check out the rest of the stops on the blog tour, there’s some amazing blogs in there!

What they say: Better to have loved and lost, than never loved.

Paul Starr, Irelands leading cardiologist dies in a car crash with a pregnant young women by his side.

United in their grief and the love of one man, four women are thrown together in an attempt to come to terms with life after Paul. They soon realise they never really knew him at all.

The love they shared for Paul in his life and which incensed a feeling of mistrust and dislike for each other, in his death turns into the very thing that bonds them and their children to each other forever.

As they begin to form unlikely friendships, Paul’s death proves to be the catalyst that enables them to become the people they always wanted to be.

The Review: So this is the story of the aftermath of the death of Paul Starr, the perfect-on paper, dream doctor who seems almost too good to be true. And it turns out he is. It’s been some time where I’ve read a book where there were so many lives intertwined and I’d forgotten how great it was when you were invested in each and every character, as I was here. The characters were unusual in their range in terms of age and roles in the book, you had stoic, mothering, bright and energetic and finally the innocent, tell it like it is shoulder to lean on. The differences between each of their lives gave us so many issues and experiences, with a few different genres thrown in there too and it made it all the more enjoyable. Each and every female character had me, and the more I read the more I felt for them. Of course in the blurb there is the mention of ‘unlikely friendships,’ and this was most definitely the highlight- the friendship between the four was excellent, heart-warming and beautiful and timely, which is so important to me-it’s a bit of a bug-bear where a friendship or relationship doesn’t evolve, you’re just suddenly hit with it. That didn’t happen here and I was thrilled. I did say ‘female characters’-the only character I didn’t warm to was Paul, or the memories of him anyway, I found him selfish and sly to be honest and I couldn’t understand that for the most part they continued to speak of him in such a fond manner, where I was livid on their behalf, but then Ms. Hogan had a surprise in store in terms of his character …

As you can tell I really liked this book. There were some issues, I don’t know if it was me, but there were times where I felt like parts had been cut out, maybe to make the story more snappy, but I did get confused from time to time. I found myself to be editing in my head a little as I read where it seemed like some sentences that I would have expected to be in a certain place to explain things were later in the page. Saying that, there weren’t many of these issues, and as this was a review copy it’s more likely they’re fixed since (or else, as I said, it’s just me!)

My Husband’s Wives had ups and downs and mini mysteries, peppered with clichéd (and sometimes cheesy!) occurrences that were predictable in a good way and yet not always fully predictable, ensuring it was always vivid and easy to picture in your mind’s eye. It was a book I’d have read in a day (although it says on Amazon this is 260 pages it felt like more, because it’s such a saga, and yet it flew!) had I had the chance (the kids know when I’m enjoying a book and decide to jump in and do their thing) and yet, conversely, one that, had I known I’d enjoyed it so much, I’d have waited until I could ingest it over a few nights, possibly in front of a big fire.

Some moments stay with you forever. The day Evie Considine knocked on her door would be one of those that would not fade from Grace’s memory easily, or ever. It was a warm day. They had planned a picnic the evening before, just Delilah and herself.

Delilah left Evie standing in the doorway, as unsure where to put her as Grace was about how to welcome this familiar stranger to their home.

‘Hello,’ Grace said. Her voice held a little trepidation. Why do you always have a fair idea when you are about to hear bad news?

‘Hello – we’ve never actually met, Grace, but my name is Evie. Evie Considine-Starr.’ She was an icy grey-blonde, coiffed and immaculately tailored. Her navy blue eyes were large and childlike beneath lids that hooded with age more than shrewdness. Her voice was porcelain, but softened by nerves. She held herself straight and might be formidable, but there was a little girl quality to her that picked out her vulnerability so she couldn’t hide it, even if she tried. She was absurdly overdressed for the weather and younger-looking than the sixty-five years she must surely be at this stage.

Grace held out her hand. ‘It’s nice to meet you.’ They shared a handshake with no warmth. ‘What can I do for you?’ She reversed backwards into her hallway, feeling as if this perfectly prepared woman who had slipped silently about in her imagination for so long had caught her in the act of some sordid activity. She moved into the nearby dining room that they never used. She could feel Evie inspecting the place as they entered the room. ‘Have a seat.’ But she did not sit. This was not a social visit.

‘I’m here about Paul.’ Her voice was even, unemotional, but Grace knew it couldn’t be good news; she was a million miles off just how bad though. ‘He’s dead.’ Evie said the words with a finality that took all the air from the room between them.

Grace could not speak, she tried to take in the words, but they weren’t hitting home, her lungs had cut off breathing and after a moment she had to remind herself to suck and blow. It was as though someone had bubbled-wrapped the world and insulated her from those two words.

‘I thought you should be first to hear, and of course to tell Delilah.’

‘He can’t be; he can’t be dead – how?’ Grace’s voice didn’t sound as if it belonged to her. She dropped to the nearest chair. Paul, dead? There had to be a mistake. This was all some awful mix up. ‘How…’ Her mind raced. ‘I mean, when…’

‘Look dear, you’re in shock, we’re both in shock, probably. You’ll have to decide how best to break it to Delilah. She’s, what…’ Evie leaned her head to the side. It was strange to hear this woman speak of her daughter as though she knew her well, as though there were some connection there far beyond what Grace felt there was any right to be. ‘She’s sixteen this year, isn’t she?’ Evie nodded sagely, twisted the emerald and diamond band on her wedding finger. ‘A difficult age to lose her father,’ she shook her head, as though it was all a question of timing. Shock, even Grace could see it, she was in shock. ‘All she needs to hear is that it was painless, as far as the doctors are saying. He was driving at the time, so…’

‘Can we see him?’ Grace had to let the fact that Evie knew anything about their lives slip past her. In this moment, she had to concentrate on taking in the news. ‘What about…’

‘It would be better for Delilah to wait; at least until we see what she has to be prepared for.’ Evie picked an imaginary hair from the lapel of her soft expensive jacket. ‘They want us to identify him. Well, they want me to identify him.’ She sniffed. Perhaps it was as close as she came to crying.

‘Oh?’ Grace felt the room spin about her. Her hands were sweating against her bare legs. She’d put on a denim skirt for a day at the beach. It felt sticky and clingy and as though it might have grown a couple of sizes too small. The whole house suddenly moved in closer about her for a moment. She felt she might faint. She took a deep breath, raised her eyes to see Evie regarding her reservedly.

‘It’s shock. Better to be in the boat you’re in than where Annalise Connolly is.’ The words were cold, but maybe Evie too was still in shock. ‘She was in the car with him. They were travelling from the hospital early in the morning, and swerved to avoid a dog.’ Her voice quivered, only slightly, and then she straightened herself, cleared her throat. ‘He careered into one of those big trucks, from what the traffic police could tell me.’ She nodded towards the front of the house. ‘He was trying to avoid a dog. A blasted dog.’

‘I didn’t ask.’ Evie stared blankly at Grace; perhaps it was just dawning on her that she should have. ‘I suppose she must be or they’d have said, wouldn’t they?’

‘And the boys?’ It was strange talking about Annalise Connolly’s children like this. They never talked about them; Paul talked about everything but his life with Annalise and the two sons they had together.

‘No, it was just Paul and Annalise, from what the guards can make out.’ Evie shook her head. ‘You’d have to wonder…’ She didn’t finish the sentence, but Grace had a fair idea of the sentiment. Maybe before Delilah was born she’d have felt the same.

‘So, do you want to come?’ She was looking at her watch, a simple Cartier gold snake slid about her papery wrist.

‘Pardon?’ Grace had lost track of Evie’s words, as though she’d missed a step somewhere between the kitchen and the front door; the universe had taken a sidestep on her.

‘The guards, they’re waiting outside to take us to see him. It’s only right that you’re there too. After all, you had a child together.’

‘He was my husband,’ Grace said. He’d never divorced her. She still wore her ring most days. He was still a big part of their lives, even if he had fathered the two boys with Annalise Connolly.

‘No, Grace.’ Evie gazed with the fervour of a zealot. ‘No, Grace. He was still my husband. We never got divorced.’ 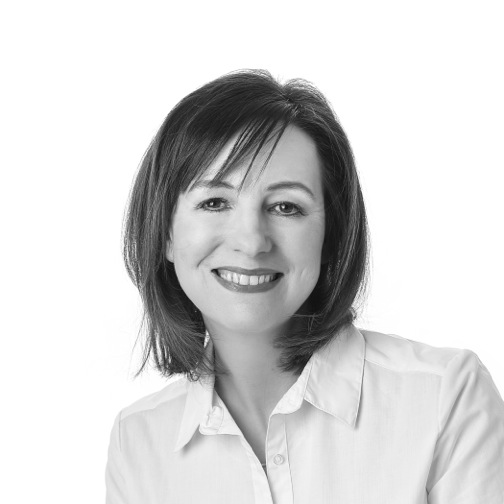 Faith Hogan was born in Ireland.  She gained an Honours Degree in English Literature and Psychology from Dublin City University and a Postgraduate Degree from University College, Galway.  She has worked as a fashion model, an event’s organiser and in the intellectual disability and mental health sector. She lives in the west of Ireland with her husband, children and a very fat cat called Norris.

She was a winner in the 2014 Irish Writers Centre Novel Fair – an international competition for emerging writers. 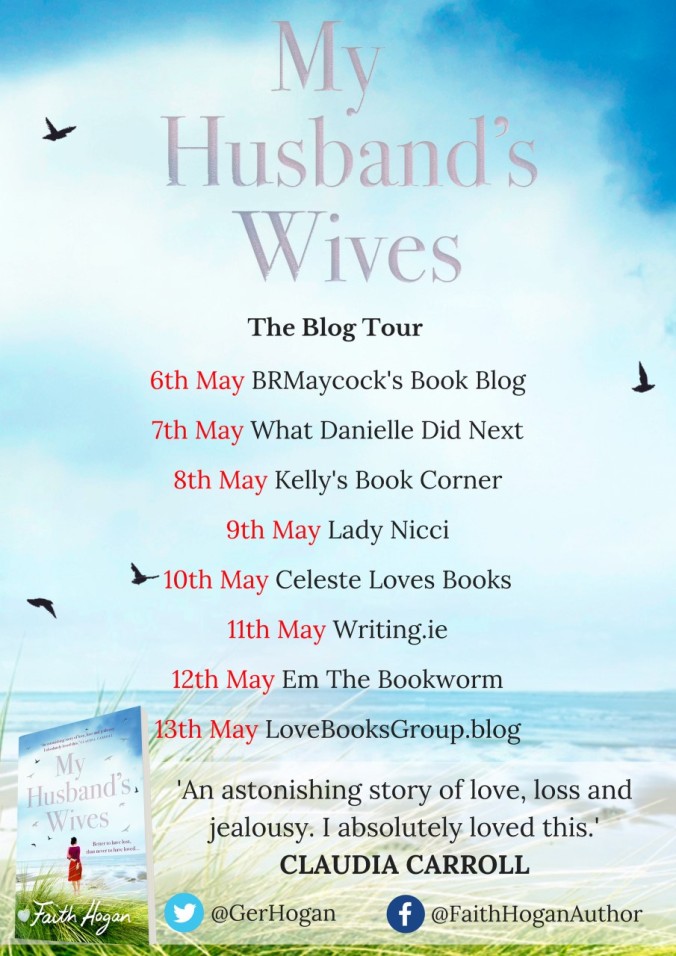 2 thoughts on “Blog Tour: Review and Extract: My Husband’s Wives by Faith Hogan”