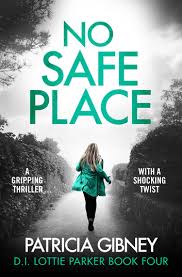 What they say: There’s nothing more dangerous than a familiar face…

As funeral mourners stand in silence at Ragmullin cemetery, a deafening cry cuts through the air. Lying crumpled at the bottom of an open grave is the bloodied body of a young woman, and Detective Lottie Parker is called in to investigate.

Knowing the body can’t have been there long, Lottie wonders if it could be Elizabeth Bryne, a young woman who vanished without trace just days earlier. And with a new boss who seems to have it in for her, Lottie is under pressure to solve both cases quickly.

As two more women go missing from Ragmullin, Lottie and her team fear there is a serial killer on the loose. And the disappearances are strikingly similar to a cold case from ten years earlier. Could history be repeating itself?

As journalists begin to interfere with Lottie’s investigation, she fears the killer is about to strike again. Lottie is in a race against time to find the missing women, but the killer is closer than she thinks. Could Lottie be his next target?

If you love Angela Marsons, Robert Bryndza and Rachel Abbott, you’ll love the latest pulse-pounding thriller from Patricia Gibney. No Safe Place will keep you guessing until the very last page.

The Review: I suppose I should start by sending you to previous gushes about this, the Detective Lottie Parker Series: Book 1 here, book 2 here, book 3 here . All three books I raced through, gobbling up every-single-word. I’ll be honest, I don’t even know how to begin this review. This was without doubt my favourite of the Lottie Parker series. I’m pretty sure that i haven’t said that before and if I have apologies but I honestly cannot think of how it can. And breeaathe.

Okay, so we begin, as you do, with a young girl running through a graveyard, trying to get away from someone. What happens next of course, I can’t tell you but I can tell you it’s been done before (and not just in my nightmares as a child), but never this well! I was shocked and sat up straight and then ran out of the room to get snacks as I knew I was in for the long haul. So with what just happened (read the book), you’d really expect that the next thing would be that this the DI Lottie Parker heads off looking for this particular person but no, the way this book is done, as you look at it with the unforgettable team at Ragmullin, there is nothing to look for, only a whole lot of local tales (special mention to the first witness, what an amazing lady!) and thoughts and speculation on people who are missing.

There are a lot of characters in this book but they are all easily traceable and trackable, you remember each of the missing women through encounters both on and after their train journeys, you remember the suspects through their quirks and attitudes, the police force are of course always unforgettable and very entertaining. There were some changes in the usual faces, most notably with Superintendent Corrigan, and I hoped upon hope that it wasn’t the end for a character that I always look forward to hearing.I loved getting to know some new characters, in particular a viper of a reporter whose making life difficult for Lottie and on a fully different spectrum, the lovely Grace who defin superseded any relations they usually arrive in books to make things difficult for a character. I loved Grace and was excited at her involvement which meant more air time for Boyd who  I also adore.The baddie came in the form of a stranger who we hear on the train and who is worrying in his thoughts throughout the book.

There are of course a few unlikeables scattered throughout and at many times there were boulders in my stomach as I watched women being stalked on the train and then was passed over to suspects homes, where things were as dark and worrying.

There were shocks and tragedies of ASTRONOMICAL proportions and at one stage I found myself cursing out loud in surprise. As said above this is my favourite book in the series. I may have said this for other books (I don’t think I have), but without a doubt it really is, pacing, setting, thrills, spills, shocks, tragedies and some very magnetic off kilter romance. Exceptional. Thanks so much to Netgalley and Bookouture for the book in return for an honest review.

What they say: ‘Let me out! Please…’ My tiny fists pound the door, but my voice reverberates off the stone walls and hangs in the air as if suspended by spider’s webs. No one comes…

Years later, a woman is found face-down in a pool of blood. Detective Lottie Parker is called to the remote farmhouse in the bleak Irish countryside. Inside, she finds a scene that speaks of uncontrollable rage: glasses smashed, chairs ripped apart, the woman’s body broken.

A black rain jacket makes Lottie think she knows the killer’s identity, but then she finds a disturbing clue: is the murder linked to an old case at St Declan’s asylum? A case investigated by her own father, just before he took his life.

When another victim is left without her tongue on the hospital steps, and a young girl goes missing, Lottie knows she has to act fast. Can she face her own demons and uncover the truth before another life is taken?

An absolutely gripping page-turner from the bestselling author of The Missing Ones and The Stolen Girls. If you love Rachel Abbott, Angela Marsons or Robert Dugoni, you’ll be completely hooked.

The Review: I have to admit one of the greatest thing I’m finding about this series is that all the books are so different (Previous gushes on Ms. Gibney’s books-The Missing Ones is here and The Stolen Girls here ) and memorable. Also from the second I pick one up, and put it down, just hours/ a day or two later, I’m looking forward to the next. Again a Lottie Parker that never disappointed.

There’s so much going on in this book, with Lottie floundering as she struggles with her mother (who I love by the way) and a tough back story of neglect and abuse of a girl we don’t know as well as the startings of domestic abuse now, in Lottie’s juristiction. This meant there were various threads going on at the same time, stories that you couldn’t fathom would all end up being connected and my eyes ingested every last word.

We are of course back in Ragmullin (makes zippy uppy action with fingers-I will not say it;)), and in the brilliantly done police station where there’s general chaos and sometimes disinterest too and I beyond savoured these pages.

I will admit that firstly, this was a little bit of a tougher read for me in terms of descriptions and secondly that there was the odd time near the start of the book that I had to re-read as I found it confusing. Saying that, well, look, 448 pages and as a book blogger I generally head to the shorter books quicker than the longer ones (I know-Lengthest, but I do do it), but this is a series I will ALWAYS go to first and if the others and this one are anything to go by, I will always be gutted when I’m done. Excellent book, perfection in setting, characters, mystery, and the now trademark sarcasm and comedy thrown in by Parker and Boyd. Loved it.

Thanks so much to Bookouture and Netgalley for this book in return for an honest review.