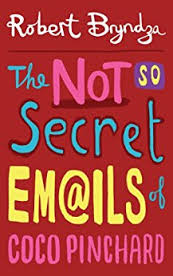 What they say: Coco Pinchard always dreamed of being a successful writer, but then life got in the way. She married young, had a son, and put her dreams on hold… But now she’s forty, and her first novel is about to be published! Her husband Daniel has greyed nicely into a silver fox, and her son Rosencrantz is all grown up. Shouldn’t it be time to enjoy life?

That is, until the annual family Christmas when her hideous in-laws come to stay, and Coco opens her gift from Daniel. It’s not the jewellery she chose, but an iPhone. This marks the start of Daniel’s mid-life crisis and Coco catches him in bed with a younger woman.

The iPhone becomes a confessional, and as Coco’s life unravels, she documents her seemingly endless (and often entertaining) run of bad luck through emails to loyal friends Christopher, an ageing trustafarian, and Marika, a slightly alcoholic schoolteacher.

Then Coco meets the hunky Adam and she’s back in the world of dating as a single forty-something. Read the emails that tell the heart warming and often hilarious tale of Coco picking up the pieces, in this fun, feel-good Romantic Comedy.

The Review: I had heard so much about this series of books from Robert Bryndza, in the first instance from  Facebook posts Bookaholic Holly from Bookaholic Confessions (excellent blog-check it out) and, always being in search for chick lit I was very tempted but then I Read The Girl in the Ice and The Night Stalker and Mr Bryndza was somehow cemented in my brain as a thriller writer and so that was it. Then one day I began to see different parts of the series on special offer and started to buy them up. One of the first books that jumped out at me when I signed up to Kindle Unlimited was this book and  I saw it as a sign that I had to cop on and get moving (yes I do put this much thought into books!).

So, I’ve always loved reading books where you find out what’s happening through emails or a diary and this was no exception. We begin with a description of Coco’s  christmas that had me ready for a great book from the get go-“Rosencrantz” ( that’s Coco’s son) “picked up his nan, Ethel, from her nursing home, and she began with the usual, ‘This might be my last Christmas’ before inviting herself for Christmas next year, and Easter, and Mother’s Day … ”

The book sees Coco, author (yay!) of Chasing Diana Spencer, an, um, alternative look at the royals, who is doing some book promo and hoping her book will hit it big. After a perceived too frank interview, Coco is shunned from the book world and has to try to figure things out. Throw into the mix some issues with her husband Daniel and her son, a struggling actor and you get pacing and a story that keeps your eyes glued to the screen. The characters were exellent, I’m not going to mention  too many but Ethel was epic (and I don’t use that word lightly), in particular there was a gorgeous  letter that she wrote to Rosencrantz (who I also really enjoyed) that I re-read after,  and Chris was so lovely, and of course Coco was such a legend, strong and inspiring. The most excellent thing about this book was how brave it was, it didn’t just make you smile, it made you giggle, titter, and snigger too! It was very much in the ‘Carry On’ style in places, and yet the perfect balance of seriously over the top inappropriateness was equaled with good old fashioned ‘it’s the way you tell em’ humour. I loved it all and can’t wait to get to number 2.
Rating:5/5 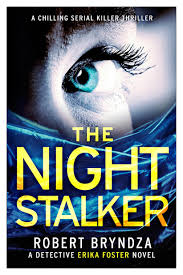 If the Night Stalker is watching, you’re already dead…

In the dead of a swelteringly hot summer’s night, Detective Erika Foster is called to a murder scene. The victim, a doctor, is found suffocated in bed. His wrists are bound and his eyes bulging through a clear plastic bag tied tight over his head.

A few days later, another victim is found dead, in exactly the same circumstances. As Erika and her team start digging deeper, they discover a calculated serial killer – stalking their victims before choosing the right moment to strike.

The victims are all single men, with very private lives. Why are their pasts shrouded in secrecy? And what links them to the killer?

As a heat wave descends upon London, Erika will do everything to stop the Night Stalker before the body count rises, even if it means risking her job. But the victims might not be the only ones being watched… Erika’s own life could be on the line.

The global bestselling author of The Girl in the Ice is back with a heart-racing, electrifying thriller. If you love Angela Marsons, Rachel Abbott and Karin Slaughter, you’ll be hooked on Robert Bryndza.

Watch out for more from DCI Erika Foster.

The Review: I’d like to start by apologising for my lengthy absence. Every blogger out there whose been gone a while generally comes back and it’s either personal reasons, or some huge achievement … I’m not sure I can offer you either. I HAVE been writing a new rom com, part of a series, and considering I’ve been gone exactly a month I should be telling you that this is finished, but I’m ambling along, albeit with some purpose, and am nearly finished draft 1. And hey, I’ll take it, as there was a time I was afraid that It Started With A Snub was going to be my sole work. So anyhoo, good to be back and I have been reading all around me as I’ve gone, so I will have a constant flow of reviews for you in the coming days/weeks, so that’s something too!

You’ll remember how much I adored The Girl In The Ice by Robert Bryndza (see review here). I raved about it, recommended it in every facebook forum possible and outside of social media, with friends and family that I thought would enjoy. I was thrilled to be back to see Erica Foster again, back to find another killer on the loose in the streets of London.

The pacing of this book was epic, the atmosphere created from the start charged, backed up, as before, with impeccable descriptions that put me right at the scenes of the murders, and I found myself nervously making my way to bed at night, checking under beds and in cupboards (I hate being an adult sometimes!).

We were shown intimate details of characters that were close to Erica, and in the back of our mind I was trying to figure out if they were related to the goings on. Special mention for those out there who are writers/ avid readers, they will be be especially happy with the presence of an author in this book (or maybe I’m just nerdier than I thought!).

We were also privy to conversations between two characters in a chat room, and so had a slight edge on DCI Foster, albeit not much. These, joined with an extra back story helped us piece together the puzzle of deaths that were connected and yet not alongside Erica (not before as I’m sure others could). They were delivered in a dark, fast paced manner that kept me wanting to read the whole time. I will say that I found this book darker than book 1, and tougher too, and so it comes with a slight caveat on the level of detail in terms of people’s private lives (porn on computers and the like) and methods of murder, meaning  I’m not sure that it will fit all of the people that book 1 did, however it will most definitely lasso even more of an audience into his books. A great book that I will also be recommending, that can be read as a standalone or part of the series (you may as well go back and read book 1 too!)

Cannot wait for the next book in this series. Thanks to Netgalley and Bookouture for this book in return for an honest review.